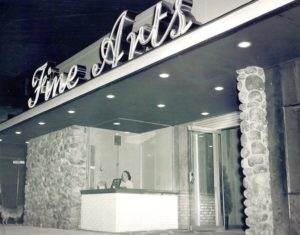 If you have been to the theatre, then I’m sure you are no stranger to the oriental art embellished throughout it.

If you haven’t had the pleasure, stop by for a movie and keep an eye out for the Emperor and Empress on each side of the screen.  Don’t forget to appreciate Oriental scenes along the wall behind 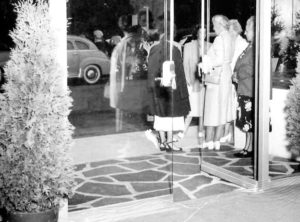 Cinema One; they truly enhance the feel and look of the hallway.

Have you ever wondered what the significance of this oriental heritage is?! 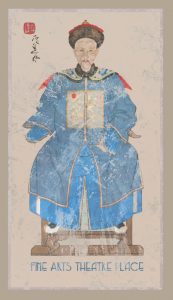 After WWI the Eastern part of the world began to open up. Oriental imports quickly became a popular and excessive demand. As the oriental art style became more available, it continued to grab more and more attention.

During this period in time the owner of Fine Arts, Burt Coughlan, and his partner were mindful of the successfully, growing trend. Coughlan grew up around Chinese pottery, vases, etc. and was attracted to its simplistic light brush strokes and few colors. In his apartment he had smaller versions of the Emperor and Empress that you see on opposite sides of the screen. Coughlan copied and enlarged the images to decorate the theatre with them. 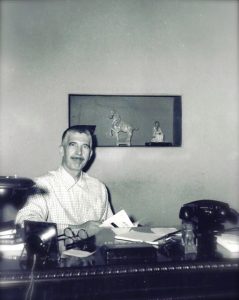 In addition to the oriental theme, he also created the classic visuals along the hallway!

Furthermore, the name Fine Arts was meant to dedicate the building to the “Fine Arts”; Coughlan also had his own art studio upstairs in the building. He added the Empress and Emperor as well as his very own creation of visuals in the hallway, hoping it signified his goal to have art all throughout the building.

Burt Coughlan was successful in the theatre business for a long time; he was aware of what worked and what didn’t. Believing it was best for the theatre, he was sure to match the adornments of the building to the theme of the historic films during that time.

Next time you stop by, take notice of the beautiful and classic oriental art that has remained over the years. Now you will have a better appreciation and understanding of the mural’s history as well as the theatres!